The Nigerian Ports Authority, NPA, Nigeria Customs Service, NCS and the Seaports Terminal Operators Association of Nigeria, STOAN, yesterday unanimously agreed that contrary to insinuations in some quarters, the Lekki deep seaport will by no means pose a threat to the already existing Lagos ports comprising of Apapa and Tincan ports.

The organizations which made their positions on the matter known at a one day retreat/lecture with the theme, “Lekki Deep Seaport: Identifying the Gains, Challenges and Potential Threats to Lagos Ports”, organized by the League of Maritime Editors in Lagos argued that rather than compete with the Lagos ports, the Lekki deep seaport would on complement them.

Leading the discuss, the keynote speaker who incidentally is the Managing Director of the Nigerian Ports Authority, NPA, Mr. Mohammed Bello Koko observed that the morbid fear by the stakeholders that the emergence of Lekki deep seaport may signal the death or possibly turn the existing ports in Lagos area to tourist sites was a mere fallacy.

Represented by the Assistant General Manager, Operations, NPA, Mr. Ayodele Durowaye, the Managing Director maintained that the Lekki deep seaport operates by principle of hub and spoke adding that “as a derivative to this, the existing ports will simply function as feeder ports i.e when big vessels call at Lekki, other ports will be fed with their own market share.” 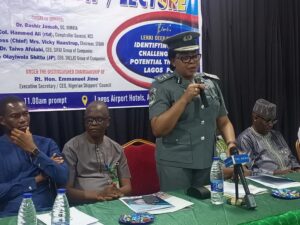 “In other words, the existing ports would function as regional ports to serve destination cargo of their catchment areas”, he added.

Speaking on the gains of the emerging Lekki deep seaport, Koko pointed out that with the level of preparedness for the take off of Lekki port and the commencement of commercial operation in quarter 1 2023, Lekki deep seaport would be a game changer in port operation not only in Nigeria but West African sub-region.

He listed some if the key features of the port to include: berth depth of 16.5 meters, the deepest in the sub-region, hosting of post – Panamax vessels, deployment of the state of the art modern cargo handling equipment including six (6) ship to shore gantry cranes with a reach of 21 containers and twin-lift capability.

The NPA boss listed the implication of the above to include: the level of efficiency would be very high and with the hosting of post-panamax vessels. “Consequently, the cost per container box would be very low compared to the existing ports in Lagos thereby leveraging on economy of scale. These liners would be encouraged to use the Lekki deep seaport as they seek to minimize operational cost to maximize their profit.

“Lekki port would be positioned to function as hub for container traffic both in the sub-region and the LPC and TCIP which will eventually be hosting feeder vessels for containers coming to Lagos area. Linked to the above is that the expected cargo throughput in Lekki deep seaport would be high given its role as a hub which comes with double handling operations.

“Reduction in the cost of doing business owning to benefit of economy of scale accruable. Nigeria port system would ultimately be mainstreamed into global port system given the competitive advantage it offers.”

On possible challenges that may bedevil Lekki deep seaport from optimization, Mohammed Bello Koko hinted that with the immense benefits that Lekki deep seaport poise to offer in changing the landscape of port operation, there was the constraint of hinterland connectivity which according to him was considered the fundamental flaw in the planning process.

According to him, “It is important to note that the port is segmented into two: there is the aspect of maritime space and hinterland connectivity for cargo evacuation. While the attention has been on the maritime space, there is complete neglect of the hinterland connectivity. This is likely to be an albatross for the optimization of the benefits of the project investment as well as efficiency of the port operation. 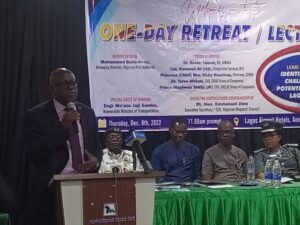 “For instance, there is no rail connectivity, even the road connection is grossly inadequate. The only way out to is to embrace barge operation in the short run. This does not foreclose the need for multi-modalism and inter-modalism that should guarantee the fluidity of cargo evacuation and ultimately, efficiency of port operation.”

He, however, maintained that there is no doubt that operationalization of the Lekki deep seaport would be a game changer not only for Nigerian Ports Authority’s operation but Nigerian economy at large insisting that it was important that necessary logistics infrastructure be put in place to optimize the benefits and guarantee positive impacts. “It may be necessary for the Nigerian Ports Authority to create requisite synergy with relevant bodies towards addressing the observable operational constraints. It would equally be necessary to engage in advocacy to sensitize the various stakeholders in their respective roles in actualizing the provision of these critical infrastructure”, he stated.

On his part, the Customs Area Controller of the Nigeria Customs Service, NCS, Apapa command, Comptroller Malanta Ibrahim Yusuf maintained that Lekki deep seaport was not a threat to Lagos ports while warning that a strategy must be put in place to sensitize stakeholders on the purpose of the port.

Yusuf revealed that about that 15 percent of the cargo originally meant for Lagos ports were going to that Lekki axis adding that all the cargo that would be going to Lekki deep seaport when operational would be consumed there and that will give a relief to the Nigerian ports.

“So, the aim is to relieve the mother port here from those kind of cargoes. We have a lot of liquid cargoes coming here and being stored in this place and from here you move it to that place. So, why not have it there and consume it there or process it there? I think the point is for us to understand what the niches are and the purpose”, he said. 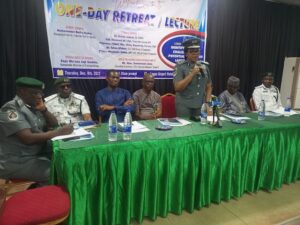 Also speaking, the spokesman of the Seaports Terminal Operators Association of Nigeria, STOAN, Dr. Bolaji Akinola agreed with NPA and NCS that Lekki port was not a threat to Apapa and Tincan ports.

“So, it’s not a competition rather they are going to complement each other. What Apapa and Tincan cannot do, Lekki will do. The largest vessel coming to any port in Nigeria is the WAFMAX vessel with maximum capacity of 4,500 TEUs. Some other vessels even have to lighter in some other countries before coming to Nigeria. When they come to West Africa, they can’t come to Nigeria first, they go elsewhere to lighter before coming. So, all of these will be eliminated with a 16.5 meters deep seaport like Lekki. They will come in straight, all the neighbouring countries that look up to us will be able to ship their cargo through Nigeria.

“It’s not only Lekki port, Ondo deep seaport is coming up. I am sure you are aware that the Outline Business Case is ready and is expected to go for FEC approval, I think before the end of this year. It has its own niche, the focus for Ondo is Bitumen export and there’s room for it. Badagry deep seaport is coming to help us stem the diversion of cargo to Cotonou port especially, it will also have its own niche and of course, you know Ibom deep seaport is also coming. The niche for Ibom is looking towards feeding the North East Nigeria. 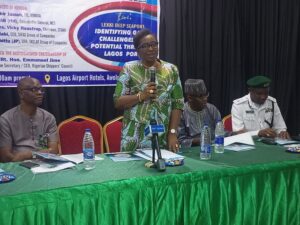 “So, these ports are not in competition, I think they will complement each other”, he posted.